Our party has the goal to make Europe talk and think about our main principles: Self-Determination and Europe of the Peoples.

Of course, we have the Catalan and Scottish referendums next fall, as well the possible secession of Flanders; the growth of independentist movements in Veneto and South Tyrol, the recognition of Cornwall as a nation, and many other political claims in each country or nation.

But let’s face other topics beyond. In Bavaria, children cannot learn Bavarian at school, and Bavarian is considered an endangered language by the European Union. The German government is doing the same with Frisian and Sorbian. They are letting them die. The same attempt is made by the Spanish government, changing the names of Aragonese and Catalan in Aragon, or displacing Catalan from the Balearic Islands into a second range language. 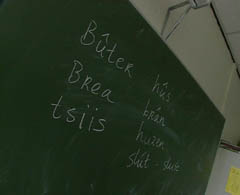 We have to stop these attempts against the national cultures of our countries. Any language, even if is only spoken by a fistful of persons, is important. It is culture, it enriches ourselves as humankind. We cannot let them die.

Aside from this, we should also discuss the subsidiarity from Brussels. For instance, they cut the funding to the peripheral regions and let their agriculture or fishing die. In Andalusia they have to “buy“ the quota from other countries to be able to fish, like in Galicia when they want to export milk, because they overproduce their own quotas. Perhaps they are not properly assigned instead.

So this is the model we are facing right now in Europe: more centralisation, severance of cultures and languages and liberalism of the worst sort. What about the peoples? What about their rights?

That is the reason it is Time for Self-Determination.