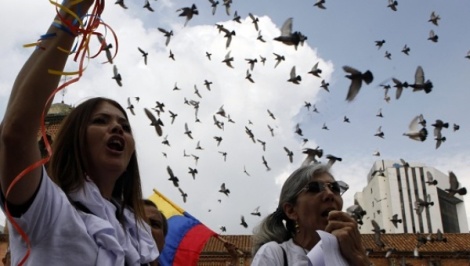 Support to Peace Process in Colombia

For more than half a century, Colombia has liven submerged in a political and violent conflict which has seen the government, left-wing guerrillas, drug trafficking cartels and paramilitary right-wing groups fight each other. The casualty balance has been devastating for the ordinary citizens, with more than 160,000 civilians killed and more than 25,000 people abducted since the 1960s. After the failure of previous governments to end the conflict, Juan Manuel Santos’s government and the FARC-EP started in the early 2010s peace dialogues in Oslo and La Habana. In the 2015 it was announced that dialogues had been fruitful, and in 2016 a final peace treaty is expected to be signed between the two biggest parts of the Colombian armed conflict.

The European Free Alliance Youth:
1. Unequivocally supports all peace dialogues and welcomes the positive outcome of such negotiations.
2. Approves the bravery of both the Santos government and the FARC-EP guerrilla to conduct these peace dialogues. The outcome will benefit both parts and the Colombian ordinary citizens.
3. Condemns the hypocrisy of some countries, notably Spain and France, who have publicly supported the Colombian peace process and the steps taken by the Santos government. At the same time, French and Spanish governments continue to refuse to take action in their own conflict with ETA and engage in dialogue for the final disarmament of ETA and the solution of the Basque armed conflict.