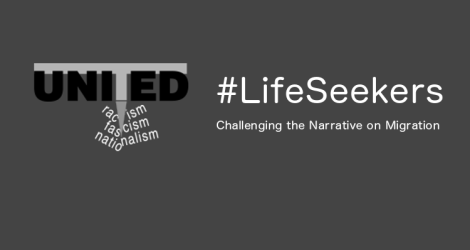 The European Free Alliance Youth, the youth of the nations, regions and minorities, has decided to adhere the campaign #Lifeseekers started by UNITED for Intercultural action, the European Network against nationalism, racism, fascism and in support of migrants and refugees. EFAY strongly believes that fascism and far right should be contested from the whole political spectrum, joining forces to isolate those who want to suppress differences in the name of a false freedom and democracy. Only following the motto “United in diversity” we will be able to build a new Europe that becomes a new home for everybody.

All across Europe, young people are facing multiple crises, the likes of which have not been seen since the 1920’s. The financial crisis of 2008 and the subsequent austerity measures enacted by European governments have disproportionately affected youth, with young people facing high levels of unemployment and an unfair housing market, all while an impending environmental crisis is putting the future of our planet at risk. Despite this complex situation demanding an effective answer, national governments across Europe have instead opted to mirror the position of the populist right: blame the migrants. With the influx of hundreds of thousands of refugees and asylum seekers fleeing war and desperate conditions in their home countries, this scapegoating has only increased, with governments and their populist challengers supporting and building upon a narrative that sees “migrants” as a homogenous mass of people who are a threat to our social fabric and the reason for many of society’s problems.

Unlike previous generations, young people in Europe today enjoy unprecedented levels of mobility. Benefitting from open borders and a host of European youth exchange programmes, more young people than ever have themselves lived as migrants, sharing a diverse range of experiences. Yet this mobility has not been matched by empowerment. Youth in Europe today feel disenfranchised and ignored by mainstream politics. For many, the embrace of a populist, migrant-blaming narrative is the closest they can come to empowerment and a sense of self-value – even if they share many of the values, hopes and aspirations with the migrants and refugees that they seek to marginalise; whether or not we are asylum-seekers, we are all Life Seekers, who want the freedom and power to shape our own futures.

We strongly believe that the tragedy of hundred of thousands of people should not be used to cover the failures of policy makers over the past decades. Instead, we call for European governments to promote an honest, transparent and inclusive discussion about the issues facing young people today, avoiding panic, fear, and hate, and actively seeking outnew and diverse perspectives and visions. This should be matched with positive action and support for young people to live productive and fulfilling lives. These social challenges can be faced only together and UNITED, with a transparent, meaningful and productive dialogueamong all sectors of society. European governments must ensure that young people feel empowered to shape their own futures – and that the human rights and freedom of all are respected.