On June 18th Treviso, on the major cities in Veneto, celebrated the Pride parade.

To celebrate the event, Sanca Veneta, the progressive movement for Venetian self-government, brought and donated 100 copies of the “Gonfaleno“. This flag is an adaptation of the Venetian flag, traditionally referred to as the “gonfalone”, to the LGBT+ flag, in Venetian “arcobaleno”. 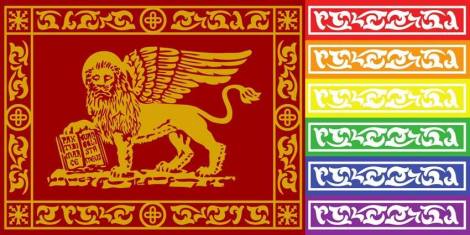 More than 6000 people from all over Veneto attended the march, which paraded in the city, even if the municipality allowing the parade to carry on in the peripheries of the city. Music, colours and dances and despite some initially dubious faces, the Gonfalone quickly spread throughout the parade.

This is part of a larger campaign to promote the respect of LGBT+ rights and a more inclusive Venetian identity. It started last year when, participating in the Pride parade in Verona, we brought one copy of the Gonfalone. The reactions from the participants were so positive that we decided to create them on a large scale.

Furthermore, on June 17th, Sanca Veneta organised in collaboration with EFAy an event at Sherwood festival, one of the biggest festivals in northern italy, titled “LGBT right in the peripheries of Europe”. The main theme of discussion was how to challenge discrimination against LGBT+ communities in a fairly conservative society such as the Venetian.

The presence of the Gonfaleno attempted also to demystify the symbols of Veneto, for too long associated with homophobia and xenophobia because appropriated by vehemently conservative political parties. It has been a “liberation day” of Venetian identity and symbols from the long hegemony on them that reactionary and conservative movements have had. 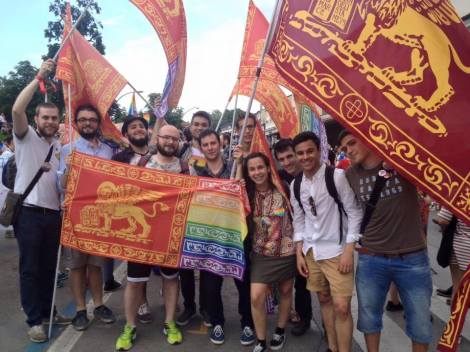 It has truly been an historical day for Veneto, its LGBT+ communities and self determination. We are proud as Sanca Veneta to have participated in this parade as part of our commitment and effort to advocate and promote the rights of LGBT+ communities.