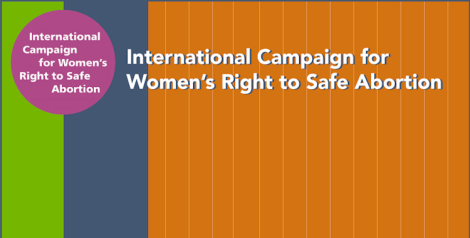 The European Free Alliance Youth, the youth of stateless nations, regions and minorities; has joined the International Campaign for Women’s Right to a Safe Abortion.

Since its creation, EFAy has adopted many motions regarding the right to a free, unconditional and decriminalised abortion. We defend women’s right to decide about their own body through a public health system that facilitates abortion in healthy and safe conditions.

We understand this campaign as a tool to struggle at European and international level for this basic right. Given the rise of far right and ultraconservative parties in Europe, we strongly believe that is more necessary than ever to bring together different groups, networks, movements and organisations in defense of women’s Rights.

We give birth, we decide.

We reproduce below the goals of the campaign:

To build an international campaign to promote universal access to safe, legal abortion as a women’s health and human rights issue.

To support women’s autonomy to make their own decisions whether and when to have children and have access to the means of acting on those decisions without risk to their health and lives.

To bring together groups, networks, movements and organizations from around the world to work together in this campaign, to collaborate in existing initiatives and create new ones.

To promote the legitimacy of the right to safe abortion in all forums addressing women’s health and rights, including those reviewing the MDGs, ICPD, Beijing, the UN Secretary-General’s initiative for women’s and children’s health, and initiatives on safe motherhood and family planning.

To build capacity to advocate for the right to safe abortion, especially at country level.

To promote young women’s leadership in the campaign at all levels.

To make the impact of unsafe and illegal abortion on women’s lives visible.

To commit ourselves to the protection of women having abortions and health professionals providing safe abortions, including in legally restricted settings.

To promote the evidence-based guidance on abortion in the World Health Organization’s Safe Abortion: Technical and Policy Guidance for Health Systems, 2012.

To develop and disseminate key messages to counter the influence of the anti-choice movement and reclaim the language of abortion as a moral decision.

To increase the availability of public funds for abortion.

We believe in and advocate for safe and legal abortion as a woman’s human right.

Women must be able to take decisions about their own bodies and health care free from coercion: this includes the decision to carry a pregnancy to term or seek an abortion. No woman should be obliged to continue an unwanted pregnancy.

Women’s human rights should be respected, protected and fulfilled.

These include women’s right to life, the highest attainable standard of health, bodily integrity, the benefits of scientific progress, and to information, privacy, freedom from cruel, inhuman or degrading treatment or punishment, and equality and non-discrimination. The failure to give women access to safe abortion puts these rights at risk.

No woman’s health or life should be placed at risk because safe abortion services are not available to her.

Abortion should not be restricted, prohibited or criminalised.

No woman who has sought an abortion, and no health care provider who has provided a safe abortion at a woman’s request, and no abortion rights defender should be stigmatised, harassed, discriminated against, or prosecuted. Governments should take action to remove laws that restrict, prohibit or criminalise abortion and remove procedural barriers that restrict access to safe abortion services.