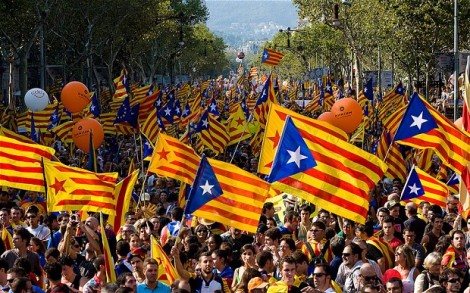 The recognition of the right to self-determination must be the most basic and essential rights of an advanced democracy.

The best tool to learn the opinion of the majority of the Catalan citizens towards independence is the referendum, as it requires a clear question, a binary answer and allows the acknowledgement of which position has a majority.

The manifestation of the Catalan population of their determination to make effective the right to vote in the last years, which has been shaped as big, transversal, civic and pacific citizen mobilisations and as a vote for the political options which explicitly stated in their electoral programme the defence of the sovereignty of the Catalan population and the will to decide the political future with a referendum.

The Spanish government and the main Spanish political groups have denied over and over the authorisation of a referendum on the independence of Catalonia, even having received many offers from the Catalans, and that many academics have manifested different legal ways to organise it according to the Spanish law.

The Catalan Parliament passed the Resolution 36/XI the October 6th 2016 in which asked the Government to celebrate a referendum on independence setting the deadline on September 2017 and ensuring it would have a clear question and a binary answer, and asking for a legal guarantee.

1. Supports the organisation of a voting procedure shaped as a binding referendum in Cat- alonia, to know the opinion of the Catalan citizens towards independence.

2. Commits to respect the result of the referendum on the independence of Catalonia and to work from its respective fields, both in Europe and in the states of the EFAY members, so as to apply it right after the referendum is held.

3. Commits to report any judicial, economic or repressive barrier by the Spanish govern- ment or by the judicial courts of the Spanish State that blocks the free right to decide of the Catalans.